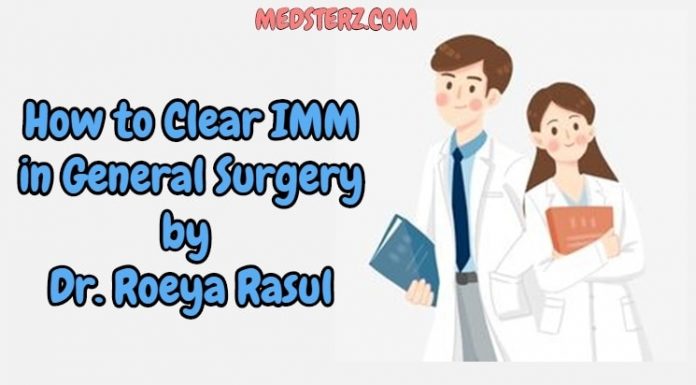 How to Clear IMM in General Surgery by Dr. Roeya Rasul

Try to go through all chapters of Bailey in your rotations. You wont remember much in the first reading but at least you would have gone through everything. MCQ books I did were: Schwartz (hated it very much), Lange, Pretest (very good and helpful), Masuq and Get through IMM. Get through IMM is just a tidier version of Masuq. I also went through Bailey EMQ book, it is good to do it chapter wise after completion of each chapter of Bailey to retain the important points but NOT good for revision.

Try to start your preparation as early as possible, specially speciality candidates, as we don’t get much time. Learn boxes of Bailey, picture captions, Mcqs can be made out of anything!

Paper 1 was ditto Masuq and Get through. Few options changed here and there, and some questions made a little tricky but on the whole very easy.

Paper 2 was a different story altogether! It was from no mcq book but people who had read well could attempt it.

Logbook. I prepared appendix well from viva point of view, but the examiner directly took me to “ so beta how much are you familiar with perianal procedures?” “Heamorrhoid surgeries”. Finally she asked me, “ have you done appendectomies?” and then the complications etc, which I satisfactorily responded to as I had learnt that chapter by heart!

Vessel incision and repair!! Very sadu examiner! I didn’t complete this station in time. Was barely able to take one stitch! Remember to take proximal and distal control of the vessel when you start.

Scenario that I had done surgery of inguinal hernia on the wrong side of the patient and now the patient is furious, I haven’t met the patient yet, but the professor wants to see me first thing in the morning…..so this was a morphed counselling station where I just had to admit my mistake and bare the consequences. Went well

Distal radius fracture in a 60 year old female with IHD and htn. Xray was also shown, but no one was interested in how we described the xray. Xray showed a well-alligned distal radius fracture with no dorsal angulation. So I said I would manage it by splinting it in the same position as the alignment is good. Station went well, examiner wished me good luck!

Cervical collar application. Know how to do this, see youtube videos and practice it. Went well.

BLS. AED application. Know the steps of AED application. Power on. (Wait for its instructions and follow them) remove pt’s clothes. Attach pads to bare chest. Attach connector to aed. Then wait for rhythm analysis and press the shock button when it tells you to. Many of the candidates were attaching the connector to the AED before attaching pads to the chest (wrong).

Chest tube. I really wasted this station. Didn’t know what the examiner was asking most of the time. His questions which I was able to answer were, when to remove chest tube and how to remove it.

Gastric CA patient, positive findings on GPE and systemic examination asked. Pallor. Jaundice, lymph nodes. Auscultate chest for pulm mets. See liver span. Spleen. Ascites. Then he asked about a gastric ca classification which I had no idea about, passed it. Later ppl told that it was written somewhere in Bailey.

Hydrocele surgery names. (forgot the name of Lord’s procedure even though I knew it very well but just couldn’t remember the name, and the examiner was sadu!!). draw incision of hydrocele. Wanted to make us perform the procedure on a foam and ball specimen he had. Went pathetic.

Intraosseous line!!! Who in the world would have thought this would be a station!! Mechanism of action. Sites commonly used.

Neck contracture diagram of bailey. How to remove the scar. Z plasty. Yahan tak sare pohanch gaye, but how to design and draw it?!!!! Yahan sab phans gaye!

In a nut shell:

In short, try to keep your nerves as calm as possible. Every station was of 6 minutes’ duration, end tak dimagh kia dahi ban chukka tha!! By the 14th station I was actually imagining how things would be if I had to re-take the toacs!!! Secondly, try to do the required tasks as calmly as possible, but do not waste much time on them either as the examiner has a set of questions which he has to ask and it so happens that if you take too long at one task, the sadu wale examiner would simply mark you a zero on the non-answered parts. Third, what I found was different in this toacs than the previous ones was that they were trying to get at more theoretical knowledge out of the candidate, names of surgeries, how to do them etc. and all of the stations were interactive!!

Good luck to all