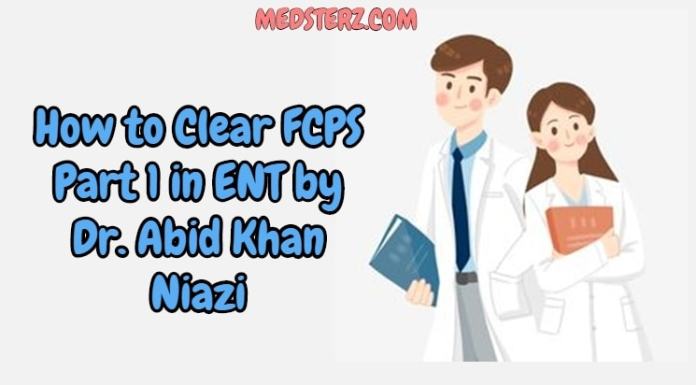 How to Clear FCPS Part 1 in ENT by Dr. Abid Khan Niazi

My experience of FCPS-1

I was very confused until the end of my house job to appear in which speciality. I decided to do “istekhara” and finally it turned out to be ENT. People say that ,there are some signs in dreams after u do istekhara but everytime i do ,i am unable to see that but ALLAH talah will automatically divert your mind and heart to that thing.so ENT was the speciality for me !!!

I started preparing in mid july ,i had 1.5 months for september attempt. I did FA ,BRS physio ,short snell ,dhingra ent ,RABIA ALI ,tanweer notes. I appeard in september attempt and i failed.. 66% in paper A and 61% in paper B. I was bit depressed for 1-2 days after result but then i realised that ALLAH likes those who submit their will to ALLAH and have patience because ,this is the tactics of SHETAN to depress you as SHETAN becomes very happy after seeing a muslim “depressed and hopeless” because this is time you’re very vulnerable.isi liye kaha gaya hai k “naa-umeedi kufar hai”. Kher ,i failed and i had to pass november attempt to get induction in january.
I started my preparation again for nov attempt but i hardly done 1st Aid ,brs physio and short snell by the time 10 days were left from exam. Again, phase of depression started ,but i believed in ALLAH…before 10 days ,i started tanweer notes and finished them in 7 days

3 days were left and i had to do dhingra and RABIA ALI but 2 days before exam i got flu and high grade fever.i hadn’t studied a single word for 2 days. 1 day before exam i did past paperz of ENT and dhingra MCQ book with explanations. Throughout that journey ,i never lost HOPE and trust on ALLAH because in this attempt my preparation was worst than last attempt. My paper was on 7:00 am ,i woke up early in the morning and offered prayer and 2 rakat salat ul hajat. I attempted paper A and B and after exit from the HALL i was not sure that i would pass or not but i kept faith in ALLAH…after exam i did wazifa of “ya haseebo” 11,000 times for 3 days.

Today ,i was sleeping after doing night duty .i saw a dream that i’m in cpsp HALL and some invagilator is close to me and he is telling me the answers.i said to him that why are you doing this ,he never replied. This was the sign Allah talah showed me in dream that ,apart from my preparation ,ALLAH’s mercy did a trick.. I woke up from sleep and opened my mobile phone ,i saw pics of result and i thought this is previous one but wait a minute ,it was nov 2017 result and my rol.no was on the list. I thought ,i’m still dreaming and that invisible power is showing me that but it was real it was raal. That was my “yaqeen ka safar”…and i have no hesitation in saying that my preparation was not to that level that i could pass.but my belief was strong..
Keep faith in ALLAH..
Keep patience ïn your life
Be greatfull for what ALLAH gave you..
I’m sure and i guarantee you that you will pass.***YAQEEN ka SAFAR***

and i have no hesitation in saying that my preparation was not to that level that i could pass.but my belief was strong..
Keep faith in ALLAH..
Keep patience ïn your life
Be greatfull for what ALLAH gave you..
I’m sure and i guarantee you that you will pass.